What is a Stye? 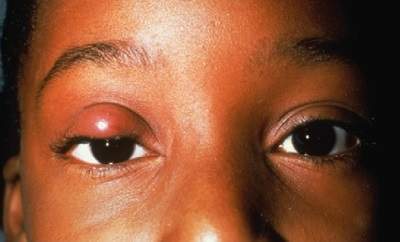 A stye — also called a hordeolum (pronounced hordee- OH-lum) — often appears as a red, sore lump near the edge of the eyelid. It is usually caused by a bacterial infection. A stye will develop at the base of an eyelash if the eyelash follicle (root) is infected. This is usually called an external hordeolum.

A stye will also develop if there is an infection in one of the tiny lubricating oil glands (called meibomian glands) inside or under the eyelid. When this occurs, it is usually called an internal hordeolum. A stye can also be caused by widespread inflammation (swelling) of the eyelid from blepharitis, a condition that affects the eyelid margins.

What is a Chalazion?

A chalazion (pronounced kuh-LAY-zee-un) is an enlargement of an oil-producing gland in the eyelid called the meibomian gland. It forms when the gland opening becomes clogged with oil secretions. It is not caused by an infection from bacteria, and it is not cancerous.

If an internal hordeolum doesn't drain and heal, it can turn into a chalazion. Unlike a stye, a chalazion is usually painless.

What is the Difference Between a Chalazion and a Stye?

In some situations it may be difficult to distinguish between a chalazion and stye.

What are the Symptoms of Stye and Chalazion?

Symptoms of a stye at first generally include eyelid tenderness and redness in the affected area, with irritation and scratchiness in the eye.

Further symptoms of a stye include:

About 25 percent of chalazia have no symptoms and will disappear without any treatment. Sometimes, however, a chalazion may become red, swollen and tender. A larger chalazion may also cause blurred vision by distorting the shape of the eye. Occasionally, a chalazion can cause the entire eyelid to swell suddenly.

How Are Styes and Chalazia Treated?

It is important not to squeeze or try to pop a chalazion or stye. This may spread the infection into the surrounding eyelid tissue.

Symptoms of a stye or chalazion are treated with one or more of the following methods:

Chalazia and styes usually respond well to treatment, although some people tend to have them recur. If a chalazion comes back in the same place, your ophthalmologist may suggest a biopsy (where a tiny piece of tissue is surgically removed and studied) to rule out more serious problems.

Don't wear eye makeup or contact lenses until after the stye or chalazion heals.

Who is at Risk for Developing Styes or Chalazia?

Anyone can develop a stye or chalazion, but if you have blepharitis, a condition affecting the eyelid margins, you may be more likely to get either one.

You may also have an increased risk of developing styes or chalazia if you: